It can be tough for games to max out high-end gaming rigs these days, but it’s also hard to keep those machines cool. The best GPU cooler can take those temperatures down in an instant, but only if you find the right fit and know what to look for when it comes to technical specifications.

How to Choose the Right GPU Cooler

Whether you need the best AIO GPU cooler or something a bit simpler, there are a number of options to choose from. Well, we’ve taken care of the hard part by finding the best graphics card coolers that cover a variety of builds from mid-range rigs to powerful professional builds.

We aren’t going to go through all the different coolers or methods used to keep your rig from running hot. Most GPU coolers simply use air or liquid; each has its own strengths and weaknesses which we’ll highlight below.

An AIO cooler is more expensive than open-air coolers but cheaper than a full liquid-cooled system. Unfortunately, they can potentially fail causing water damage which is definitely a downside. That said, they offer cooling performance other systems can’t match.

Even if you’ve already built your first PC and became familiar with all main components, or even with fan controllers, you may run into some compatibility issues with GPU coolers if you don’t look before you leap. Size is an obvious thing to keep in mind as you’ll need to have room for the cooler, and some are geared towards reference design while others are not.

Compatibility varies by brand and cooler, so the best advice we can give you is to check the manufacturer’s website. Don’t rely on listings if your card isn’t listed or you’re unsure, go straight to the source. 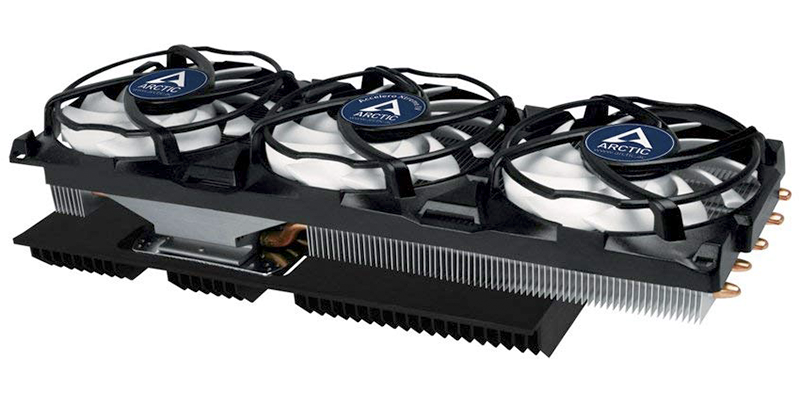 If you follow our site, you are probably familiar with ARCTIC and their lineup of CPU coolers. Their MX grease is a fan favorite, and we think you’ll love the Accelero Xtreme IV Back Side Cooler as well.

ARCTIC understands the importance of keeping your rig cool, so they came up with an interesting solution in their patented backside cooler. The design allows mounting without thermal glue, and while it’s not silent, it is very quiet. That’s due to a new fan controller, PWM control, and low noise impellers.

As for the tech specs, this system has three 92mm fans with MX-4 compound and a cooling capacity of 300 watts. It measures 288mmm long by 104mm wide with a depth of 54mm. We won’t list all the compatible cards, but popular options from both sides are included with cards like the RTX 2080, Titan X, and the RX 480.

This card isn’t quite as fancy as some of our other options, but it performs as advertised and will drop the temps on your GPU card by more than a few degrees. It’s one of the best VGA coolers if your budget is tight and comes with a lengthy 6-year warranty to boot.

One Bracket To Rule Them All 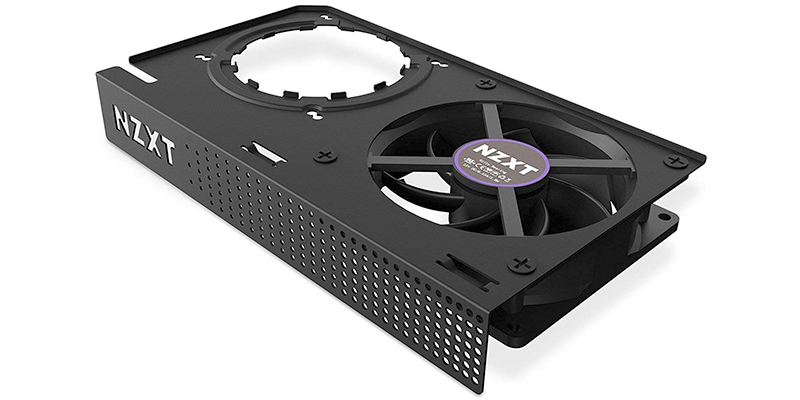 Now we’re going to take a look at something different, but essential if you depending on your system. NZXT is a name gamers know, and the Kraken G12 is a sure-fire way to take the heat down several notches in your PC.

Simple, but effective this cooling unit is designed for Kraken coolers although not limited to them. You can get up to a 40% increase in your cooling from this kit which sports a 92mm fan for active cooling of the VRM and memory no your card. The fan speed is 1,500 RPM with a rifle bearing while the entire cooler measures 201mm x 113mm 32mm. While it comes down to your build in the end, we also feel the G12 is a breeze to install.

NZXT engineered the G12 to work with a wide variety of cards in both reference and non-reference designs. That means it will work with more than 40 different GPUs and over 30 liquid cooling systems. NZXT’s coolers are a lock, but so are systems from Corsair, Thermaltake, Zalman, and Antec. As for the cards, NVIDIA covers the RTX 2080 through the old 570 while AMD ranges from the RX 480 to the 5830.

The Kraken G12 is available in Black or White, comes with a 2-year warranty and certainly won’t break the bank. While there are flashier options available, there’s a reason this cooler is continually at the top of every build list.

If you are looking for some very good fans for your GPU, then look no further because FDSTIME Graphic Card Fans will probably do the job at affordable prices.

It comes with rated voltage of DC 12V, while rated current is 0.2 Amp and with a rated speed of 2000 RPM. Along with that comes the airflow of 86 CFM and noise up to 27 dBA, meaning that it is capable of working with creating not so much noise.

The package includes a D-type interface cable, which has four different interfaces and is capable of working on three voltage powers: 5V, 7V, and 12V.

Every voltage allows these fans to work in different ways, each having a different approach to the airflow, speed, and noise, which can all be selected before you start the fan.

Capable of being connected to 3-pin or 4-pin interfaces on the motherboard, with all fans being accessible only by using one interface at a time.

A Cooler for Budget-Minded Gamers 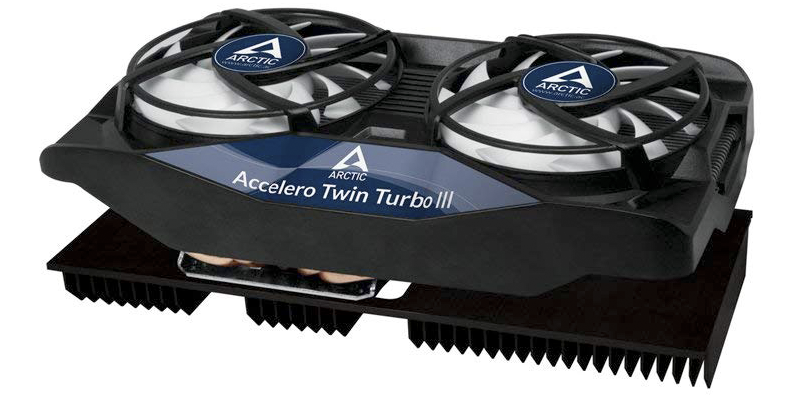 If you liked what the Xtreme IV brought to the table, but need something a little more discreet, the Accelero Twin Turbo maybe more your speed. It may not have as many fans, but it’s quite capable and considerably shorter.

There are more similarities than differences between the ARCTIC’s Accelero coolers, but you’ll save some space with the Twin Turbo III. It has two 92mm PWM fans instead of three which takes the length down to 217mm. On the flipside, it’s wider at 122mm but still retains the same thickness.

Those dual fans have a speed between 900 – 2,000 RPMs and draw 2.88 watts of juice. The bearings and shafts are the same, but this model has thicker aluminum 0.4mm fins. You’ll still get five 6mm heatpipes although the maximum cooling capacity on this backside cooler is a bit lower at 250 watts.

There’s not much else to say about this GPU cooler as you won’t need thermal glue, it’s ready to roll with its backward design and the pre-applied MX-4. It’s a big step up from those tired old case fans and hard to argue with the price point. 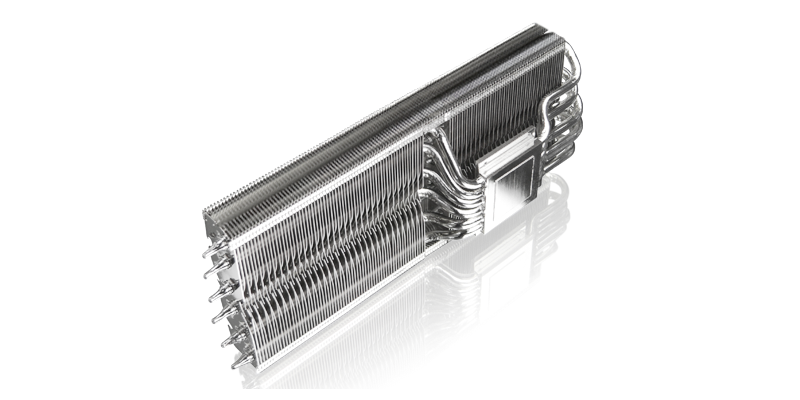 While most of the parts in our PCs are made overseas, some take a more direct route to your machine. That’s the case with the RAINJINTEK MORPHEUS II, a VGA cooler with twice the heat pipes and support for two fans.

The MORPHEUS II is a bit different from our other picks. The large aluminum and copper heat sink has a mirror copper base and one big VRM heat sink along with 24 RAM heat sinks. The latter ranges from A to E and varies in size while the VRM measures 28mm x 18.5mm x 94mm. RAINJINTEK went with 6mm heat pipes on this model, and there are 12 in all while the cooling capacity is listed at up to 360 watts.

This cooler is a little barebones compared to others as there are no LEDs, and you won’t even get fans. It can handle two 120mm fans and comes with a set of clips, but it would have been nice to get a few thrown in given the price. This aftermarket cooler is compatible with an array of cards including the R9 Fury, 1080Ti, 980 and others.

Like most aftermarket PC parts, finding the best GPU cooler all comes down to your needs in the end. Every system is different, and you have to take location into account as well if you live in a region that stays warm year round.

If you feel we left a cooler of our list that deserves attention, let us know and if you’re looking for a new card to cool, check out our list of the best graphics cards and give your rig a nice upgrade!

really yust buy an msi card with torx fans, then tou get the best and quiets gpu cooler.