The Best Fan Controller in 2023

If you’re looking to achieve the perfect balance between silence and performance for your gaming rig, you’ll have to contemplate buying a dedicated fan controller. Fan controllers are designed to control (duh!) your PC’s fan speeds at any given time, hence today’s topic is about how to choose the best fan controller money can buy.

We are aware that fan controllers are not necessarily the hottest topic among PC users (a dying breed if you ask us), and especially for those of you obsessed with gaming rigs. However, one should regard a computer fan controller just as any other essential hardware component, the likes of PC cases, case fans, CPU coolers or, why not, high-quality thermal paste.

Hence, if you’re shopping for the best PC fan controller, you’ve landed in the right place, as we’ll provide you with a comprehensive review on the topic and we’ll also give you a few options to choose from.

When and why you may need a fan controller

A couple of expensive and fancy looking “after-market” case fans will definitely prevent your gaming rig from overheating during hardcore use and abuse. The caveat to modding is that your cold-as-ice PC may sound like an Amazon drone dying at your doorstep (or like a wind tunnel) even during menial tasks, like reading this article. Some of you may say: okay, but you can always install a manual fan controller, like our founding fathers used to do back in the nineties or whenever. You know, one with knobs and all that, to regulate fan speed old-school way, Flintstones style.

But, considering that we live in the current year, automatic fan controllers are the way to go, provided you’re not a neo-luddite who hates progress. Modern-day fan controllers work by automatically adjusting fan speed as required, without “human input” that is, i.e. when your CPU or GPU is working hard and things get hot, the controller will pump fan speed up to cool things down. After that, it’s back to business as usual, i.e. your PC will be whisper-quiet again. The point being, when it comes to DIY gaming-rigs (people who build their own PCs from scratch, because it’s cheaper and better if you know what you’re doing compared to buying “OEM gear”), fans are “unregulated”, as in they always work full throttle, at maximum speed, and that may be bothersome so sensitive ears.

As any serious gamer knows, proper cooling is very important when it comes to squeezing the last ounce of performance from your rig. That’s why people are spending “beaucoup money” on modding their cases with aftermarket/high-performance fans and controllers and what not. The next question is: do you really need a fan controller?

The answer is definitely yes, provided you want to make the most of your hardware, or if your PC’s fans sound louder than you like during routine activities, or if your PC gets hotter than normal. Controlling the fan speed will give you “ultimate powers” over your system, as many advanced fan controllers come with alarms and temp-sensors to announce you when your CPU/GPU is getting too hot and stuff like that.

How to Choose the Best Fan Controller?

To keep it simple, quality always comes at a higher price. If you’re looking for whisper quiet performance and reliability, be prepared to cough a few extra dollars. As the general rule of thumb, the way a controller works is by routing all fan connections in your PC via one central hub, thus making them to meet at a single access point. Depending on its complexity, a fan controller can control each fan individually, or even program them to work in groups.

One of the metrics to look after when choosing a fan controller is the number of fan headers. Obviously, the number of fans in your PC is essential in this regard, as you may own an unusual rig, with lots of case fans and all that. Then, you should contemplate the type of header issue. The standard in the industry as per the “current year” is the 4-pin design. The old 3-pin fans are almost extinct, as developers embraced the 4-pin design, which allows them to configure fan speed using software (PWM control). PWM stands for pulse width modulation and it allows users to set up software profiles that will slow down or speed up fan speed, depending on cooling requirements at a specific point in time, in auto-mode that is.

Aesthetics may play a role, as case windows are all the rage nowadays, and if this is one of your priorities, the good news is that there are some glamorous fan controllers out there. If you don’t care much about how your gear looks like, you’ll definitely be able to save some dough in the process by buying a generic looking yet highly practical and utilitarian fan controller, especially if you own a windowless case.

Finally, there’s the controls issue, i.e. you can go for bright LED displays (some manufacturers even offer touchscreens), while other fan controllers are keeping it old school. Now, let’s take a closer look at Amazon’s best offers, right after this short commercial break. 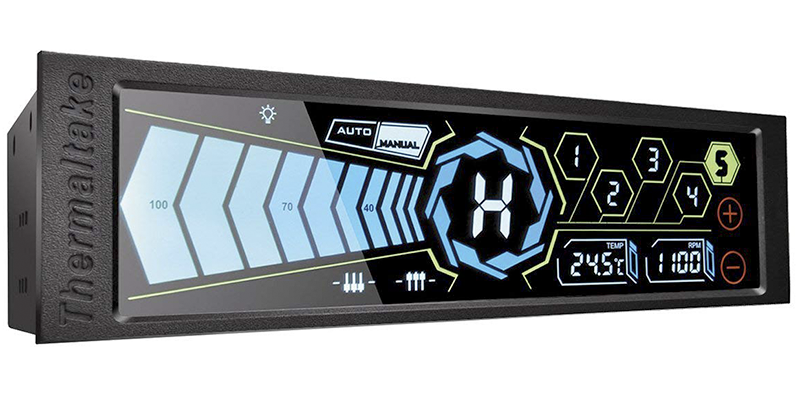 The Thermaltake Commander FT is the final boss of fan controllers, boasting a cool touchscreen display along with a 3-Pin & 4-Pin connector and 5 channels with 10 watts per channel. Unlike “normie” fan controllers, the Commander FT looks like it uses alien technology from Area 51. To begin with the basics, its 148 by 88 by 42 mm dimensions will make it very easy to fit in any 5.25’’ bay, while its solid plastic and steel construction and 300 grams of weight signal Thermaltake’s impeccable workmanship.

Besides 5x 3-pin/4-pin fan connectors and 1x 4-pin MOLEX, the Commander FT also comes with a temperature sensor probe. The speed range of the fans can be fine-tuned anywhere between 0 and 9990 rotations per minute (RPM). The 5.5’’ color touchscreen features auto-manual toggle, as well as quick temp checks/auto-manual mode, and it can be dimmed or brightened, depending upon one’s preference. Furthermore, you can easily switch between silent and performance mode, and this is pretty much self-explanatory. 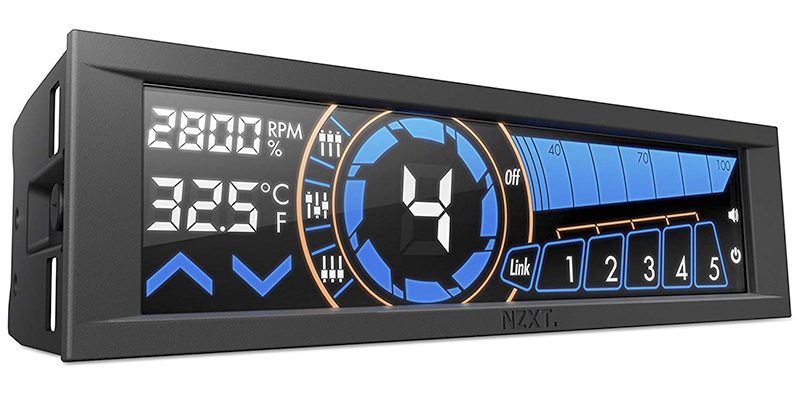 The NZXT Sentry 3 is another fancy looking touch-screen boasting fan controller, being the successor of the hugely popular Sentry 2. The display is 5.4 inches wide, a tad smaller compared to the Commander XT, and it provides RPM speed readings/temp readings in real time. Furthermore, the Sentry 3 delivers 15 watts per channel, which makes for a combined wattage of 75W (5 channels). And that’s impressive, to say the least.

The 15w/channel thing is particularly good for driving high performance 120 mm and 140 mm fans. There’s also a temperature sensor delivered in the retail package, which can be attached directly to the GPU, CPU or whatever area inside your PC you want to keep your eyes on, temperature wise. 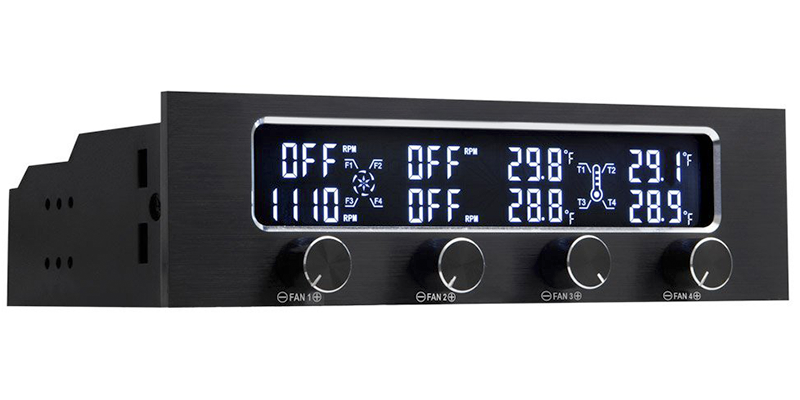 If you’re looking for an affordable fan controller, this one has your name on it, as it comes with all the bells and whistles one can expect “in the current year”, along with a decent price tag. The Kingwin Performance features a (monochrome) LCD display, overheat alarm, old school (we love this feature) turn knob controls, temperature monitoring and displays fan RPM speeds in real time.

Basically, if you’re looking for an affordable no-nonsense fan controller, the Kingwin Performance is the way to go.

Best Bang for the Buck 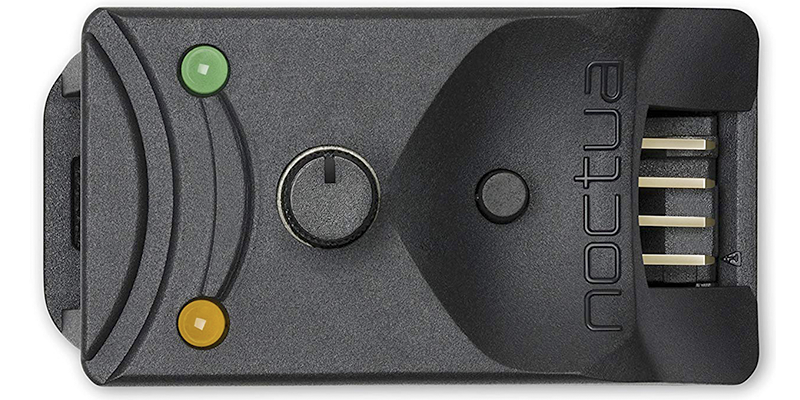 If you’re looking for a decently priced, no-nonsense, highly flexible and compact fan controller for 4-pin PWM fans, the Noctua NA-FC1 makes perfect sense. There’s no fancy touch-screen display or big bright shiny lights to speak of, and that’s pretty much reflected in the price tag. However, this Noctua-made controller will get the job done with flying colors, being capable of working in both manual mode and full auto, via the motherboard fan control system.

In manual mode, you’ll have to adjust fan speed via an old school control dial. The PWM duty cycle can be set up from 0 to 100 percent, and there’s a no-stop mode built in, which prevents the fan speed from falling below 300 RPM, hence avoiding BIOS fan-errors from popping up. By the way, you can control up to 3 fans in the same time with the ultra-compact NA-FC1 controller.

King of the Hill 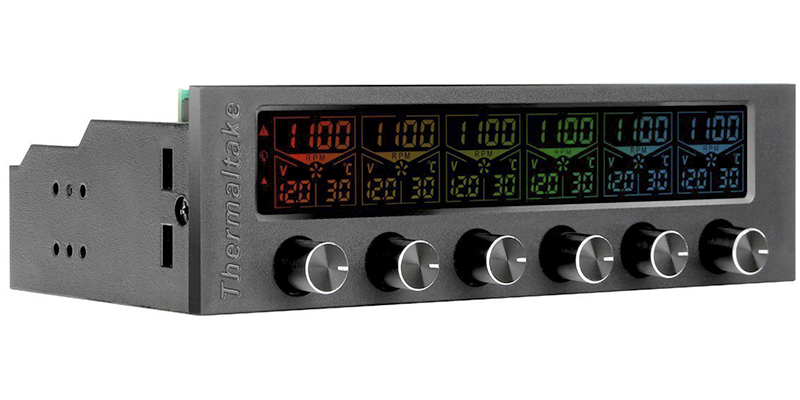 The Commander F6 is a pretty expensive piece of hardware, but you’ll get a lot of fan controller for the money asked. This Thermaltake-made fan controller boasts an RGB LCD display, 6 temperature sensors, 6 voltage control knobs (a nice retro touch) and a warning alarm with short-circuit protection. If you’re looking to take complete control over your PC’s fans, the Commander F6 is the way to go. The minimalist design of this bad boy would make for a nice addition to anyone’s gaming rig, as the Commander F6 is as rugged as it gets, making for a no-nonsense fan controller that still features 16 color illumination and RGB.

Each of the Commander F6’s six channels boasts a massive 30 watts, while the 6 thermal sensors in the retail package make it ideal for modding fanatics. The warning alarm can be set to blast off if a fan has failed or when your PC overheats for whatever strange reason.

Simplicity at its Best 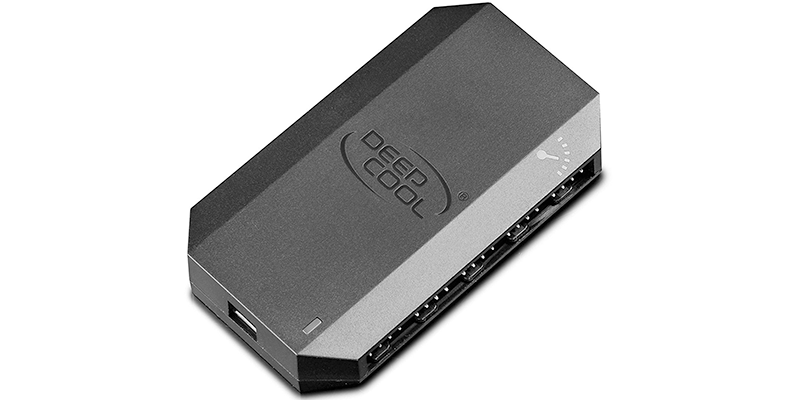 The DEEPCOOL FH-10 fan hub is a special addition to our list, as it’s capable of powering up to ten fans, whether we’re talking about 3-Pin or 4-Pin models, i.e. the FH-10 supports up to ten independent fans. However, the PWM function is only available with PWM (4-Pin) fans, so keep that in mind. Otherwise, the (3-Pin) fans will run at full speed. With PWM/4-Pin fans, you can adjust their speed all at once, i.e. they’ll run at the same duty ratio, but not the exact speed, provided you have different fan models.

All about Your FANs 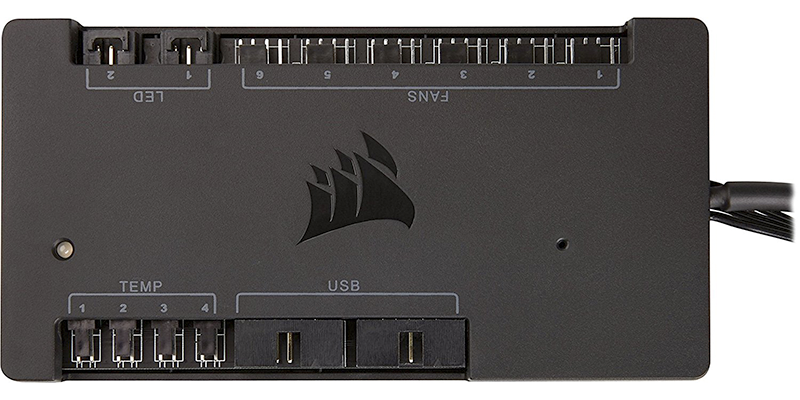 The Commander Pro is an expensive piece of gear, but you’ll get a lot of bang for the proverbial buck asked. The Pro particle says it all: this bad boy features 6x 4-Pin ports with PWM and voltage control and, on top of that, 2 RGB LED channels, 2 USB 2.0 internal headers and 4 thermistor inputs for precise temp readings.

Also, the Commander Pro is fully compatible with Corsair’s intuitive iCUE software, which provides you with full control over your system’s temperature/performance with zero hassle, as it doesn’t require you to do basically anything (full Auto mode that is). Furthermore, the Commander Pro allows you to synchronize your RGB lighting effects with SP RGB and HD RGB fans, while the 4 thermistor inputs can monitor your system’s temperatures with utmost precision. 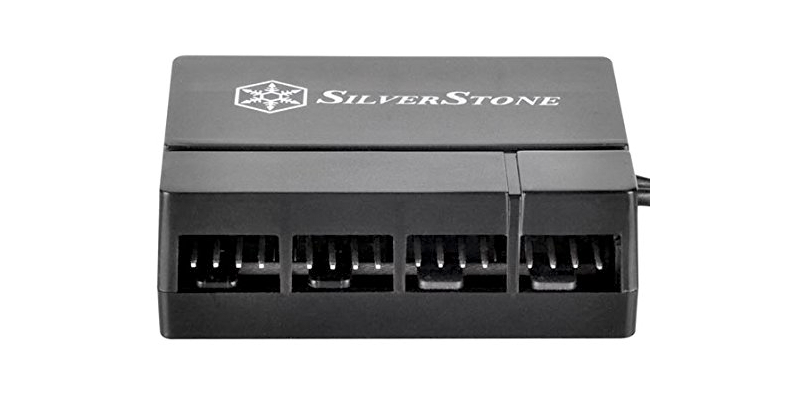 Last but not least, we have an interesting PWM fan hub from SilverStone, a small piece of hardware designed to handle up to 8 fan connectors. One of the coolest things about this fan hub is that it’s dirt cheap, looks good and it can be mounted anywhere, inside or outside the computer case, using 3M dual lock band (included in the retail package), i.e. just like a sticky bomb, thus making your life much easier.

The SilverStone comes with 2 connectors and it’s powered directly from the SATA port, providing stable/clean voltage; on top of that, this PWM hub features speed detection sensors, being capable of controlling up to 8 4-Pin fans in the same time.