The Best Ergonomic Keyboards in 2023

Ergonomic keyboards have been around for a while now, but for some reason, they’re still not as popular as regular ones. Most people don’t understand the importance of using an ergonomic keyboard, and how much it can affect your speed, efficiency, and health.

Long office hours can cause problems that you won’t notice at first, and office ergonomics are a thing of constant debate. We’re here to help you pick out the best ergonomic keyboard, but first, let’s talk about how to do it right.

How to Choose the Best Ergonomic Keyboard

Most ergonomic keyboards look complicated and intimidating at first, but they just need some getting used to.

The first and most important aspect of choosing the right ergonomic keyboard is comfort. These are made to fit the user and you should feel that. All of the properties mentioned below are related to comfort.

Firstly, you should know that the right position of the keyboard should be straight in front of you so that your elbows aren’t spread out and your shoulders are relaxed.

Ergonomic keyboards are made to make your hands move as little as possible to prevent injuries in the future. Smaller keyboards mean less movement, so compact keyboards are better than full-sized.

Related to that, it’s also better to choose a keyboard which height can be adjusted so that it suits your needs.

Next is the shape of the keyboard. Ergonomic keyboards can be shaped in different ways. The most common types are V-shaped and completely split ones, but they can also be just regular compact keyboards. Studies have shown that users tend to get used to the split keyboard faster, but you should always pick the one that’s most comfortable to you. Additionally, split keyboards are the best for wrist health.

There are also ergonomic keyboards that seem like regular full-sized keyboards, but they have a raised part in the middle. This is known as “tenting” and it fits the natural position of the hand.

Last but not least, there’s a matter of choice between wireless and corded keyboards. Wireless keyboards are more comfortable because you can move them around easily and use them wherever you want, but they require charging or battery changes occasionally.

In addition to all of this, getting the most for your health should also mean investing in an ergonomic mouse.

Now let’s take a look at some of the best options for ergonomic keyboards on the market right now. 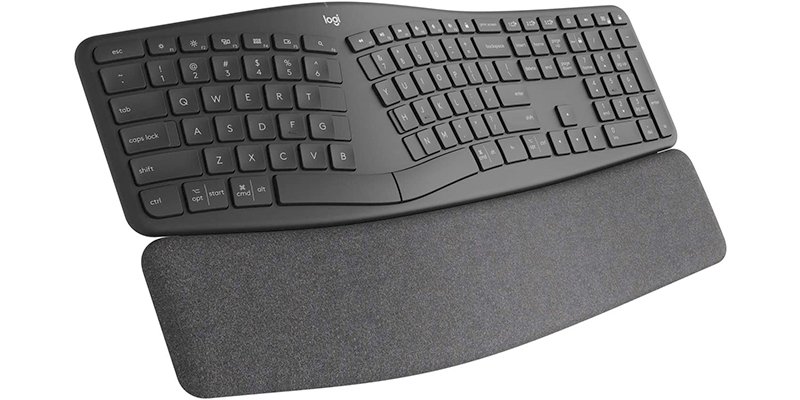 Logitech has created a keyboard made out of durable plastic with a split curved keyframe to go well with their ergonomic mice. The raised middle with the split keys and the negative tilt helps the user keep their posture relaxed and comfortable. Although it’s not one of the best wireless keyboards out there, it’s still remarkable.

The ergonomics are also improved by the addition of a super-comfortable palm rest with three layers of different materials. The company claims that this keyboard gives 54% more support than traditional types. Also, you can adjust the angle to suit you better.

Unfortunately, the padded palm rest is not detachable, which makes the already full-sized keyboard really big. Besides the regular keys, it also has some for functions and media control. It’s customizable via software, but you can only choose between some presets. Also, some keys work only on windows.

This is a membrane keyboard with tactile scissor switches, meaning that it’s a quiet keyboard great for office environments. It’s the best wireless ergonomic keyboard and works on two AAA batteries that will last up to 2 years.

Additionally, it’s multi-platform and can be connected to up to three devices via USB receiver and Bluetooth. It doesn’t have a backlight, and it takes some time to get used to it. 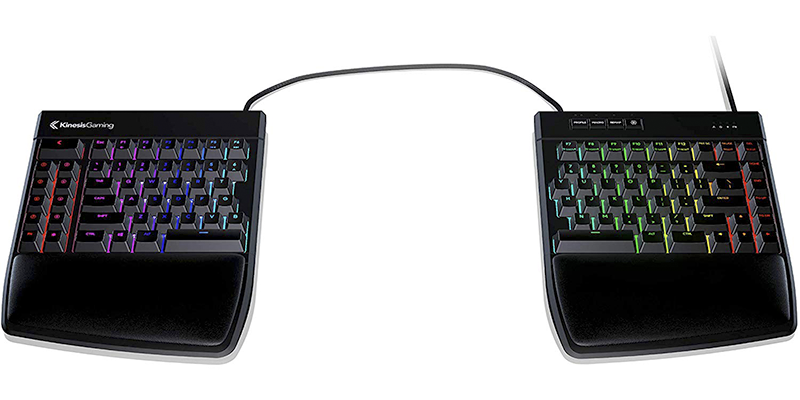 This ergonomic keyboard is one of the best gaming keyboards for those who want to keep their wrist health, but writers might also like it. Unlike the one before, it’s split completely into two parts. You can also purchase a lift kit that raises the keyboard in the middle, making the “tent” that we mentioned before, but that’s optional.

This Kinesis keyboard is made out of hard plastic, but it has an extremely soft and comfortable wrist rest. This wrist rest can be detached if you want to, although that lowers the ergonomics.

Even though it takes up a lot of space because it’s split into two, it isn’t full-sized. It’s similar to a tenkeyless keyboard, but the keys are more packed. Still, it has dedicated macro keys that can be programmed via software, but it has no keys for media control or a numbers pad. On the other side, the driverless SmartSet app isn’t all that easy to use.

This wired mechanical keyboard works with Cherry MX Switches, and you can choose to get either Blue, Red, or Brown, depending on your preference. Also, it has a full RGB backlight that can be set in one of the 11 different options using the software.

Unfortunately, the biggest disadvantage of this keyboard is probably the fact that it has no USB ports.

The Best Ergonomic Keyboard for Mac 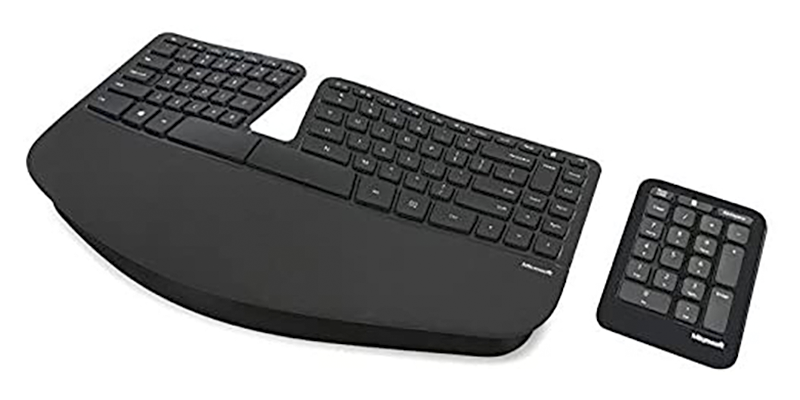 Microsoft Sculpt is very similar to the first keyboard that we covered on this list, although it has a couple of differences. The shape itself is very similar. This keyboard also has a negative tilt and a raised middle, creating a so-called “tent” that makes typing on this keyboard so comfortable.

This split keyboard is made to lower the wrist strain that users feel when typing on traditional keyboards, although it has a separate numbers pad which kind of defeats the point of ergonomics. Also, the keys aren’t made to be any smaller to reduce the movement, which is both good and bad.

Split keyboards, in general, are the best options for your wrists and posture. Additionally, you get a detachable palm rest that goes with it and the tilt of the keyboard is adjustable for maximum comfort.

It’s wireless, but non-rechargeable, and runs on two AAA batteries for the keyboard and a CR2430 for the numbers pad. It’s based on a membrane, but it’s still highly-responsive. Connecting this keyboard to any operating system is easy, making it great ergonomic keyboard for mac. 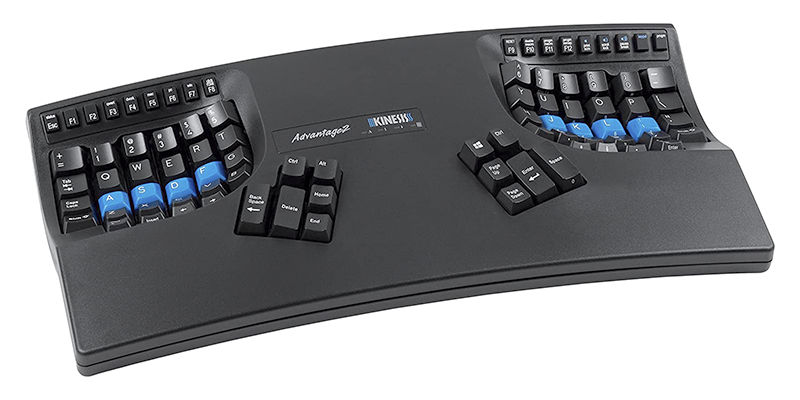 Kinesis is a brand specialized in making ergonomic keyboards, and that’s why we had to add another product of theirs on this list. This one is by far the one with the most interesting look to it.

The keys are split into two parts and positioned in concaves, with additional thumb clusters. It makes the keyboard look bulky, but it’s the best for your wrists because it minimizes the movements of your wrists. On the other side, an interesting look means that it takes more time to get used to typing on this keyboard than it takes on some other ones.

The special form of this keyboard means that it doesn’t have a palm rest or adjustable height, but it doesn’t need it.

Also, it’s tenkeyless but all the keys are fully programmable and you can change them in 100 different ways, and it can easily be switched from QWERTY to Dvorak if you want to by using an assigned hotkey and onboard memory.

This wired mechanical keyboard works with Cherry MX Brown switches, which are highly responsive, but quiet enough so that they don’t bother others. It works perfectly on Windows and macOS, and you don’t need to install any apps or software to use it. 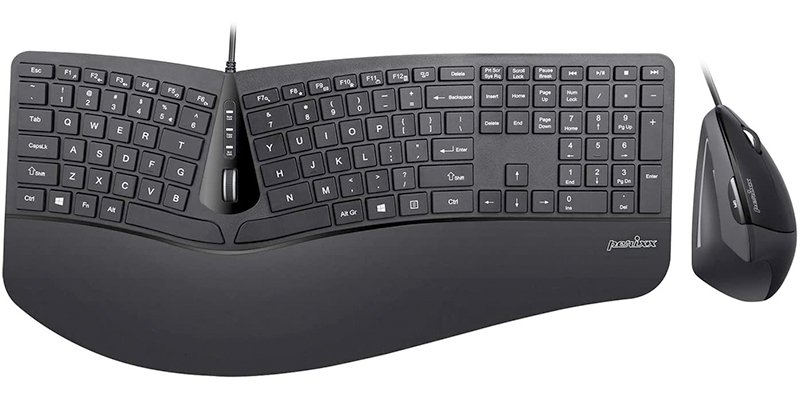 This Perixx model is a split V-shaped keyboard with a raised middle, creating a shape that fits the users’ hands naturally. Durability is ensured by high-quality plastic elements.

What makes this keyboard different from the rest are the keys put in the middle part where most keyboards have empty space for the split. Instead, this is where they decided to put some extra keys, along with a built-in wheel that can be moved in 4 different directions so that you don’t have to use your mouse as much.

Also, it’s completely full-sized, with 17 additional function keys, 12 of which are for media control. Even though it’s full-sized it’s easy-to-use, the lower layers of keys are a bit crowded, but that’s nothing that you can’t get used to.

The palm rest is integrated and made from plastic, and the tilt can be adjusted. In addition to all that, this wired keyboard is a membrane type, and although the tactile feedback is good it could be better.

The biggest con of this product has to be that it only works on Windows operated devices.